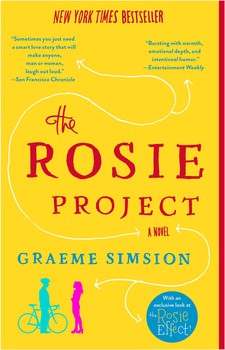 “But I’m not good at understanding what other people want.’ (Don)
‘Tell me something I don’t know,’ said Rosie for no obvious reason.
I quickly searched my mind for an interesting fact.
‘Ahhh…The testicles of drone bees and wasp spiders explode during sex.”

“The Rosie Project” is a modern romantic comedy written in 2013 by author, Graeme Simsion. Don Tillman is a genetics professor that has a form of Asperger’s syndrome which is presented through a series of obsessive compulsive behaviors and poor situational awareness. His current predicament is that he wishes to find a wife. In order to accomplish this, he creates a long survey to give out to women in order to eliminate any unsuitable partners. While working on his “Wife Project” he begins to help a woman named Rosie to find her biological father. According to Don’s survey, Rosie is completely opposite of what he is looking for but she may end up being exactly what he needs.

This book had me laughing out loud right from chapter one. I enjoyed the banter between characters and the intelligent snarky (although sometimes misguided) critical thinking from the main character. The main character Don is almost an exact replica of The Big Bang Theory’s Sheldon Cooper. Fortunately, I enjoyed the show and consequently this book as well. It was an entertaining, easy read and the main character was charismatic and lovable. Don’s inner monologues take the reader through the webs of his understanding of complex social situations which often result it comical circumstances. The one thing that disappointed me about this book to some extent was the ending. No spoilers here, you’ll have to read it… however I found the ending to be somewhat unrealistic and that left me somewhat disappointed in Don and his character development. However, I enjoyed the book and the story has stuck with me in a way that can only be represented by the word nostalgia.

Recommendations: If you enjoyed The Big Bang Theory TV show, this book is a must read!